As I work my way through my MA research, I have encountered uncomfortable questions on my own childhood, my feelings, and my experience. I do struggle to find the correct words to communicate my findings at times and took to researching other women’s experiences of rejecting femininity whilst growing up. I hoped to be able to express myself more successfully after encountering similar experiences. Rather than finding what I hoped for, I came across a blog post addressing the so-called Death of Femininity brought on by feminism. The lengthy post attacks feminism and accuses feminism of interfering with the natural biological structure of power and the family unit. Women who are wanting to compete with men and unattractive to men and will live and die alone and are labelled masculine women. Their fertility is questioned. Women are talked about as if they are not individuals and only in relation to men.  The post had 19,188 followers at the time and the comments were as disturbing as the post itself.

In my opinion, as someone who was looking for help to word how and why I was rejecting femininity as a child, feminism is not the problem. As a child I did not feel overly feminine. Old photographs show I had a healthy balance of toys, interests, and clothes. I believe the rejection of my femininity was when I became aware that I did not feel and look like I felt I should to be a ‘proper girl’, and, that there was a hierarchy. Why did my dad always have the last say when my mum done more and knew more? Why, if I acted the same as my dad and liked some of the same things, could I not be like him? I didn’t look like my mum and the boys didn’t like me the way they liked my mum, so I must be more like my dad. Why did my dad tell me I would never be as tall as him? I’m only 2″ shorter. When my body began to change, I struggled. I struggled even more when I found that other people were aware of it. I became my body at a young age. I think this is why the breasts keep reoccurring in my images. My secondary school years were a battle between me wanting to embrace my gender but never feeling like I matched up to the expectations. I wasn’t as slim or attractive as my mum. I had a curvier body than a lot of the girls at school who still looked like girls in their uniform. I am the same body size now as I was when I was around 13. I felt fat. I began to turn to food for comfort and make myself sick repeatedly. I wanted to be attractive to boys, I wore short skirts like the others. On the flip side, I would wear tracksuits, trainers and football shirts. I accentuated my accent like the boys and deepened my voice. I remember I quit GCSE PE as I was trying to run the bleep test with my tracksuit top on. I was so hot that I was bright red in the face and felt sick but I would not remove my jacket in case the others would look at my chest. This struggle with my gender and the expectation with it continued up to my late 20s. I dealt with my eating disorder at about 26, embraced the fact that I didn’t want to look as feminine as my friends with my tattoos and unconventional hair, and brushed off my mum’s concerns about my sexuality and y lack of interest in children. I was OK with who I was. This all happened before my awareness of feminism. I have come to the conclusion it is internalised misogyny.

After rummaging through memories, stumbling across the blog post, hearing people’s comments regarding gender and stereotypes, the man in the pub declaring anyone who hired a woman of childbearing age insane, the friend on social media saying the pay gap doesn’t exist and women don’t want equal opportunities with their partner when it comes to parental leave and job roles, has all added to my belief that women are reduced down to a body. They are judged on what that body looks like, what they do with it, what they don’t do with it. They are sexualised as soon as they grow breasts, later the attention moves to their reproductive organs; if they are using them too much, if they are not using them but having sex for fun, and if they have chosen never to reproduce. Boobs and wombs.

I have began to create a Tittymama Army. I want to represent the women who are not conventionally feminine but still are women. Their femininity is not for people to pass judgement on. Reflecting on the blog post and it’s followers, I would be interested to know how they measure femininity. Is it attractiveness? Is it passiveness? Does a woman being disabled affect the measuring? Or what about women of colour? What is a women can’t bear children, does this affect their femininity? I would like to create enough of these women to fill a room. I am using the colour pallet that is assigned to young girls as an acknowledgement of the early expectation of femininity put on girls which may not represent them as an individual personality. The intention is to draw attention to how women are determined by their body. The finish is crude and intentionally not pretty. They do not have to please the eye. Some are faceless as they are twice removed from society’s expectations. I want the viewer to question whether the bodies are monstrous or is it their viewing of the bodies that is. 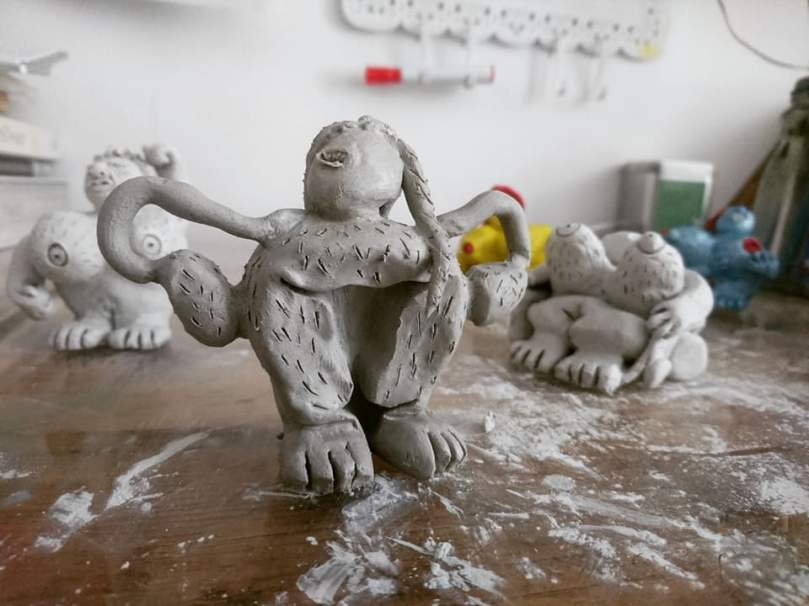